One of my favorite things to do in a new place is go to art museums. You know, as long as there aren't any toddlers with me. Toddlers are assholes in museums. Anyway, my kids are rarely assholes anymore, so when the tram let us off in the wrong part of town (we were headed to The Grand Place, but more on that in a minute), and the Royal Museum of  Fine Arts was right in our face, we decided to go where the day took us. The kids were surprisingly really excited to see actual original famous paintings, They wanted to go to one of the other museums in the area after we had seen all of the Old Masters exhibit, but I have a knee situation and I was also was experiencing a lack-of-wine situation after seeing all those paintings of naked people with overflowing wine goblets. 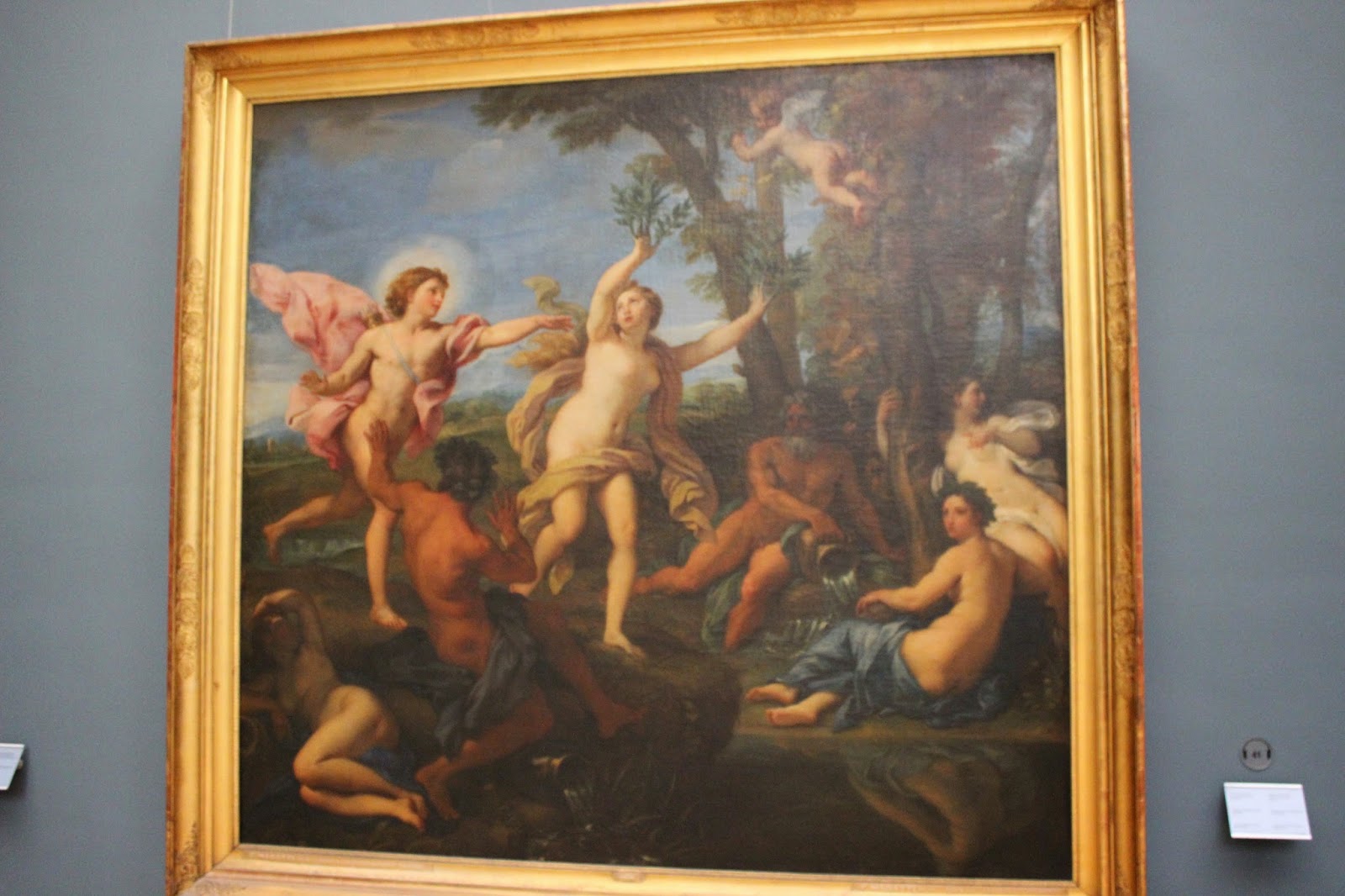 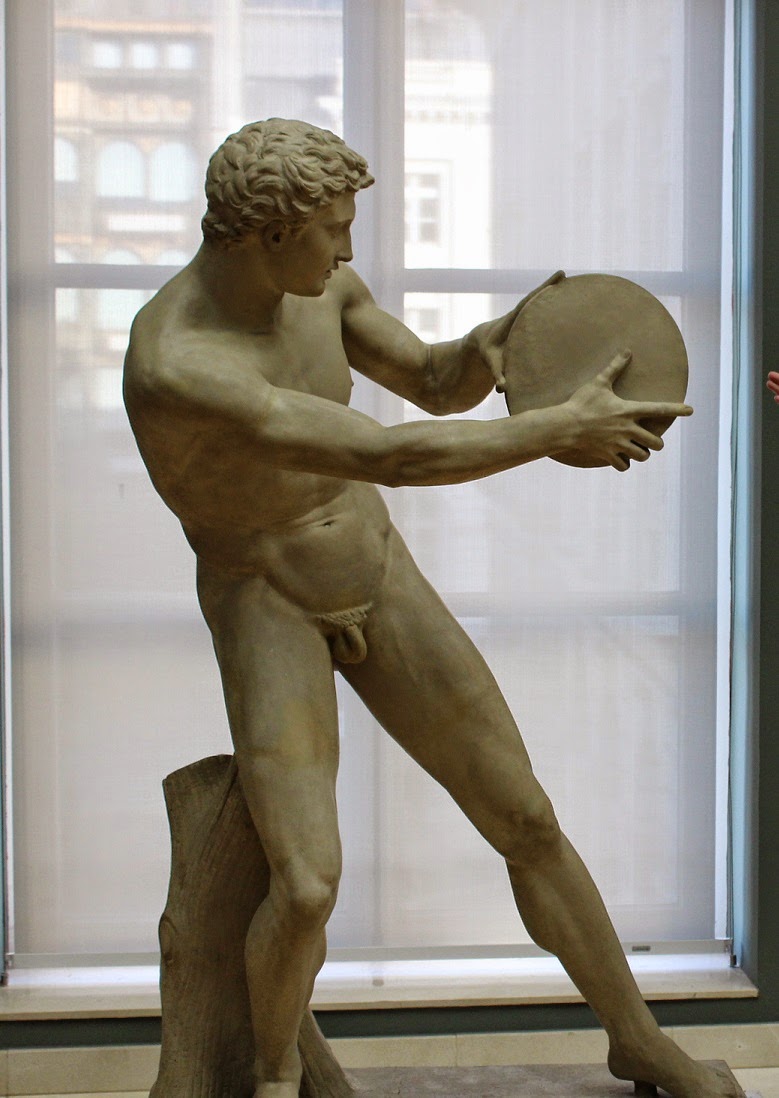 At least they used coasters back in the 1600s!
Big ones! Coasters, I mean.


We still didn't know where the tram was, so we hoofed it to the Grand Place. See that tall fancy building coming out of my head? That's where we were headed. The closer we got to the square, the thicker the streets got with tourists. I love how my kids continually remind me that a lot of people understand English here, and I'd better watch my mouth when I'm whining about my knee. 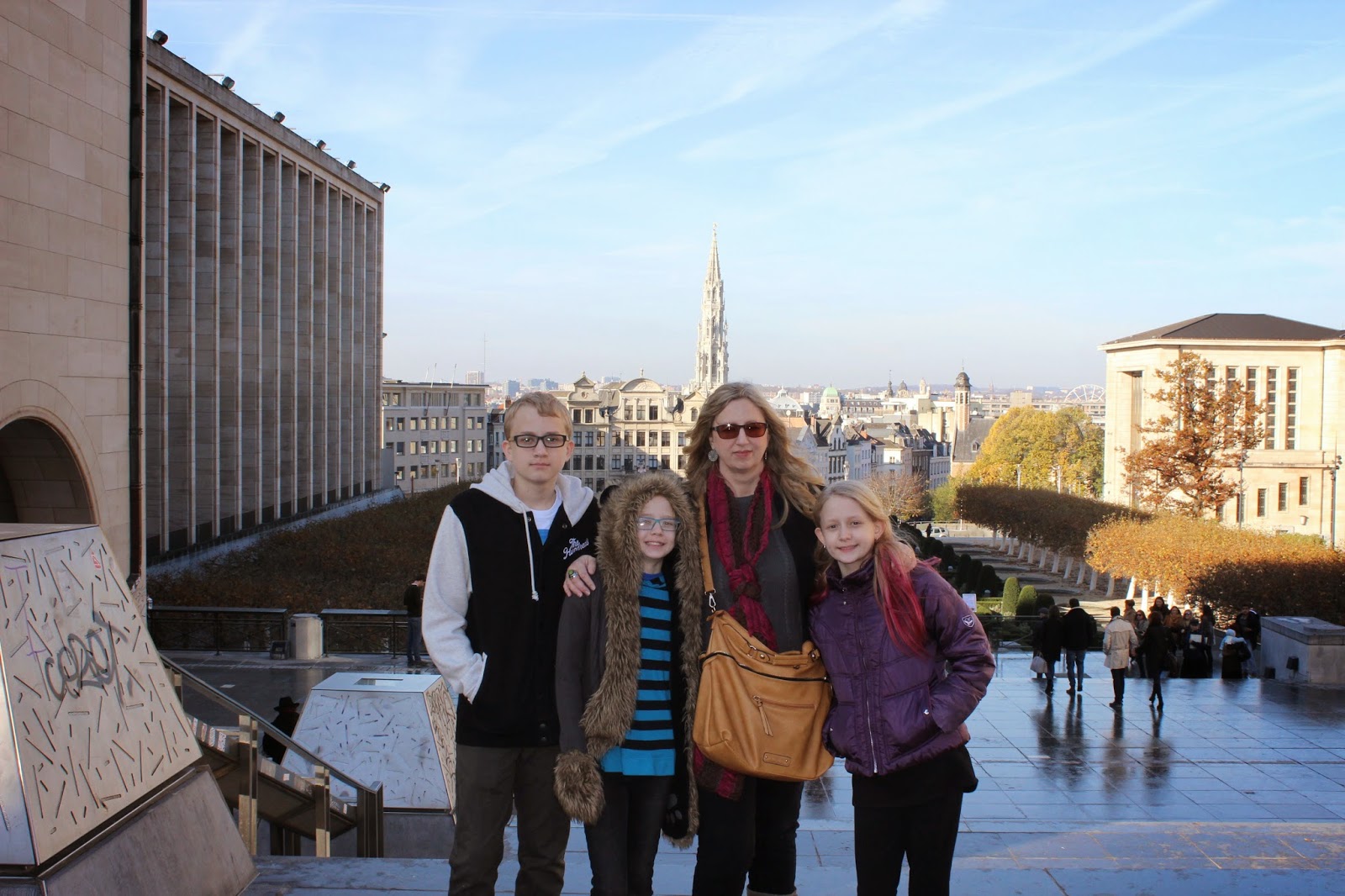 We finally got to the Grand Place, which is your basic town square surrounded by old-ass buildings. It's very touristy. Lots of chocolate shops and places to drink beer. You guys, the beer here is really good, but the extra-high alcohol content has a way of sneaking up on you. Anyway, I had beer instead of wine, as one does in Brussels. 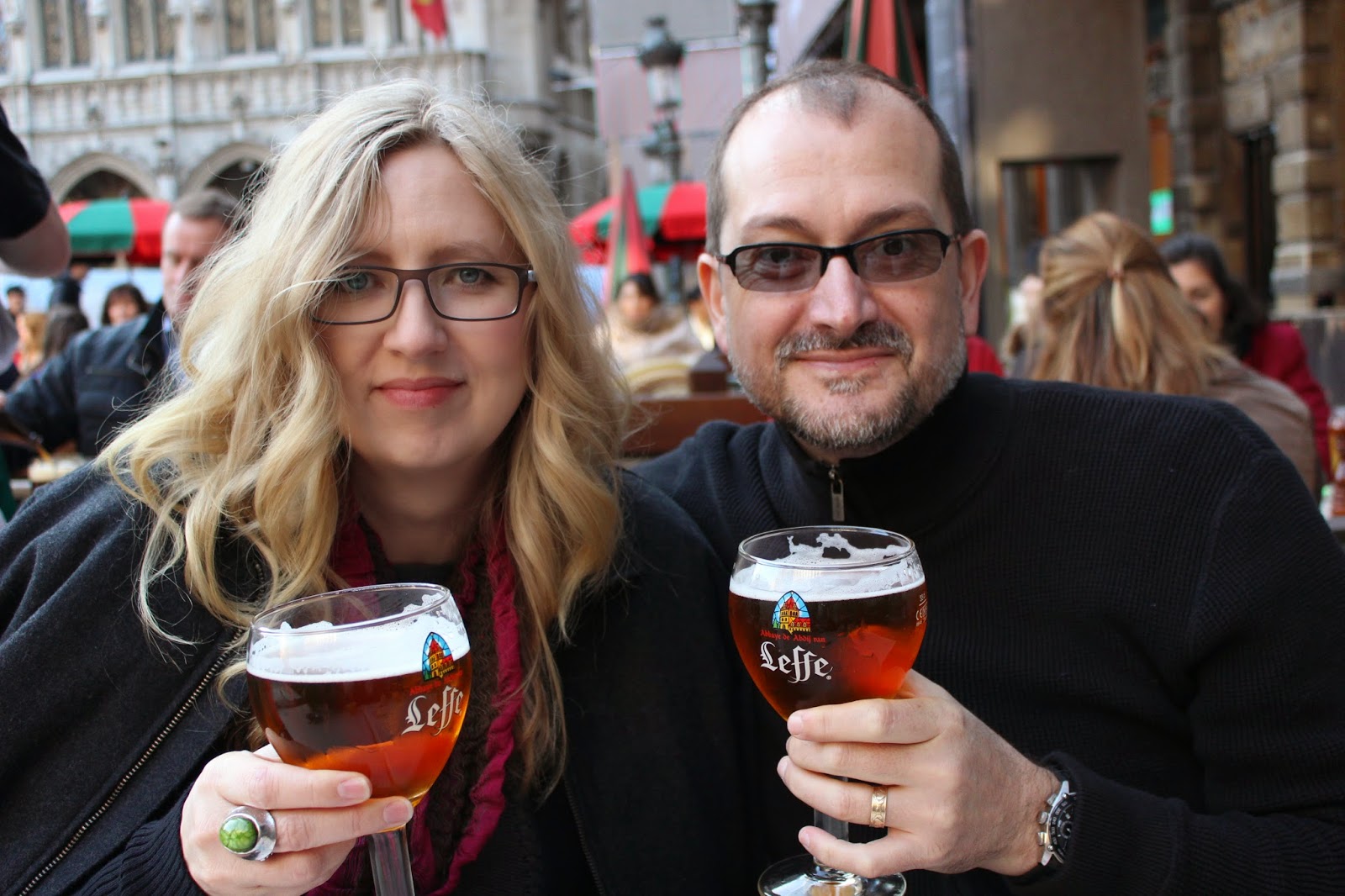 Well, that giant goblet of beer tasted delicious. Don't worry, we let the kids get hot chocolate, which also did not suck. Anyway, that beer tasted so good we decided to try another one. All the beer comes in different glasses here. I think that's so you remember that Brussels beer is the shit. 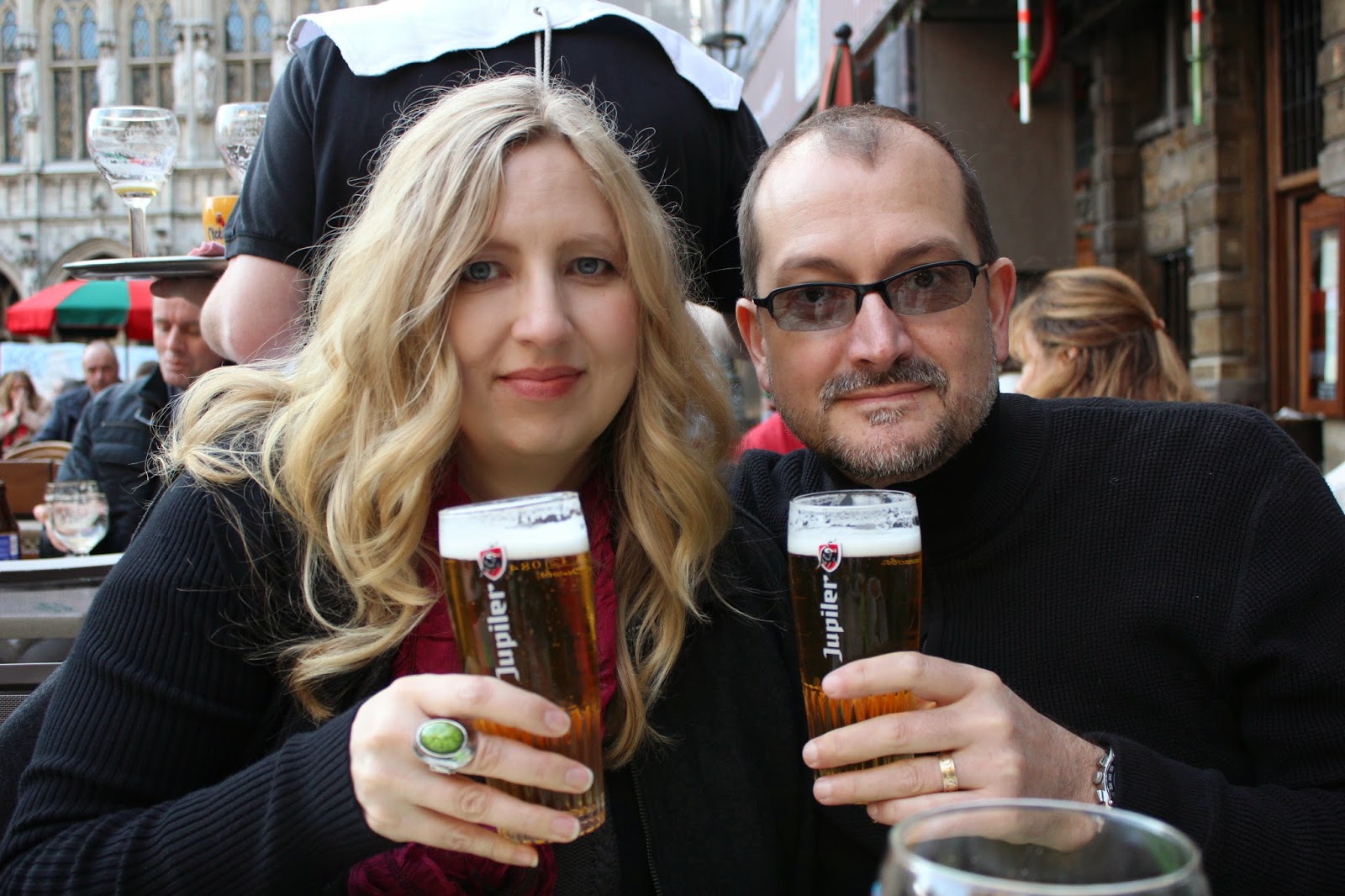 While we were drinking our beer and hot chocolate, we admired some buildings with fancy gold stuff (insert architectural term here-just because I'm married to an architect doesn't mean I know the terms, yo) on them. I would show you the photo I took of the kids with their hot chocolates, but it was all blurry and I wouldn't want to give the impression that I was drunk or anything. 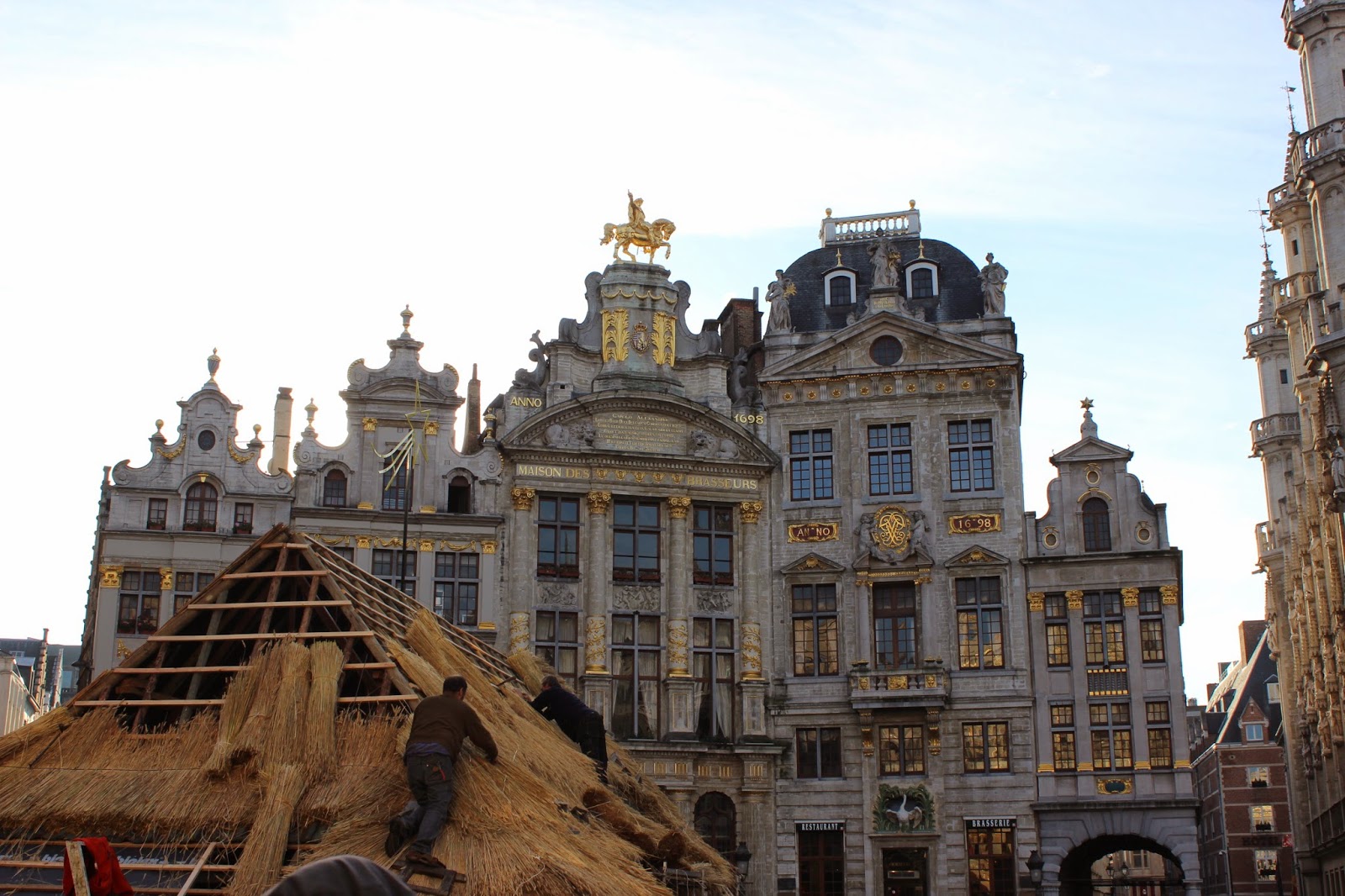 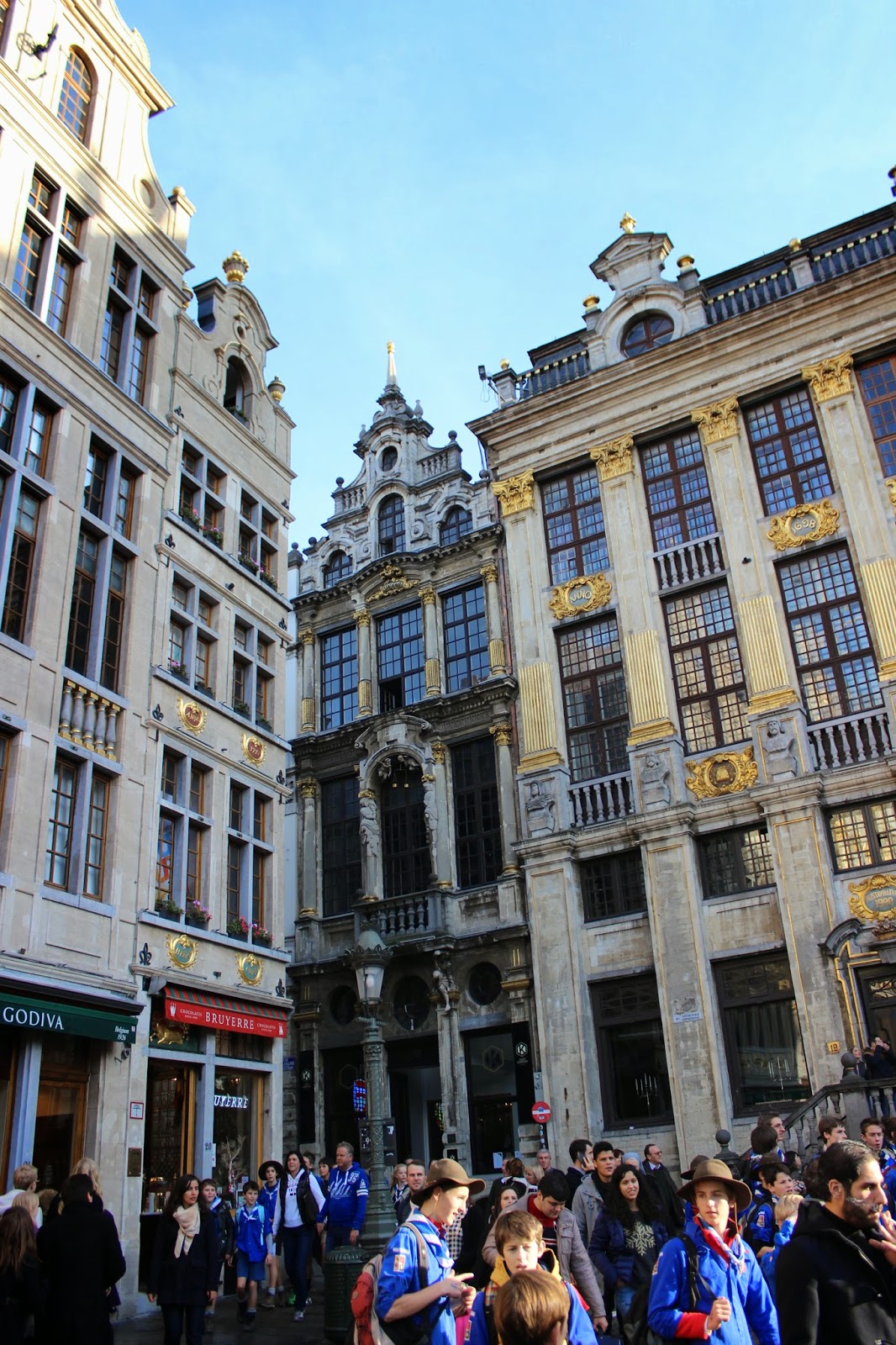 Soon I thought it was time to sample all the some chocolates, because the beer had taken over my judgement. We sampled chocolate in every shop we went to. So, I'm sloshing around, woozily trying to not think about all the chocolate I had just consumed, when we happened upon one of the most famous chocolate shops IN THE WORLD. Mary is always on the top ten lists. The beer thought it would be a good idea to go in and try it. 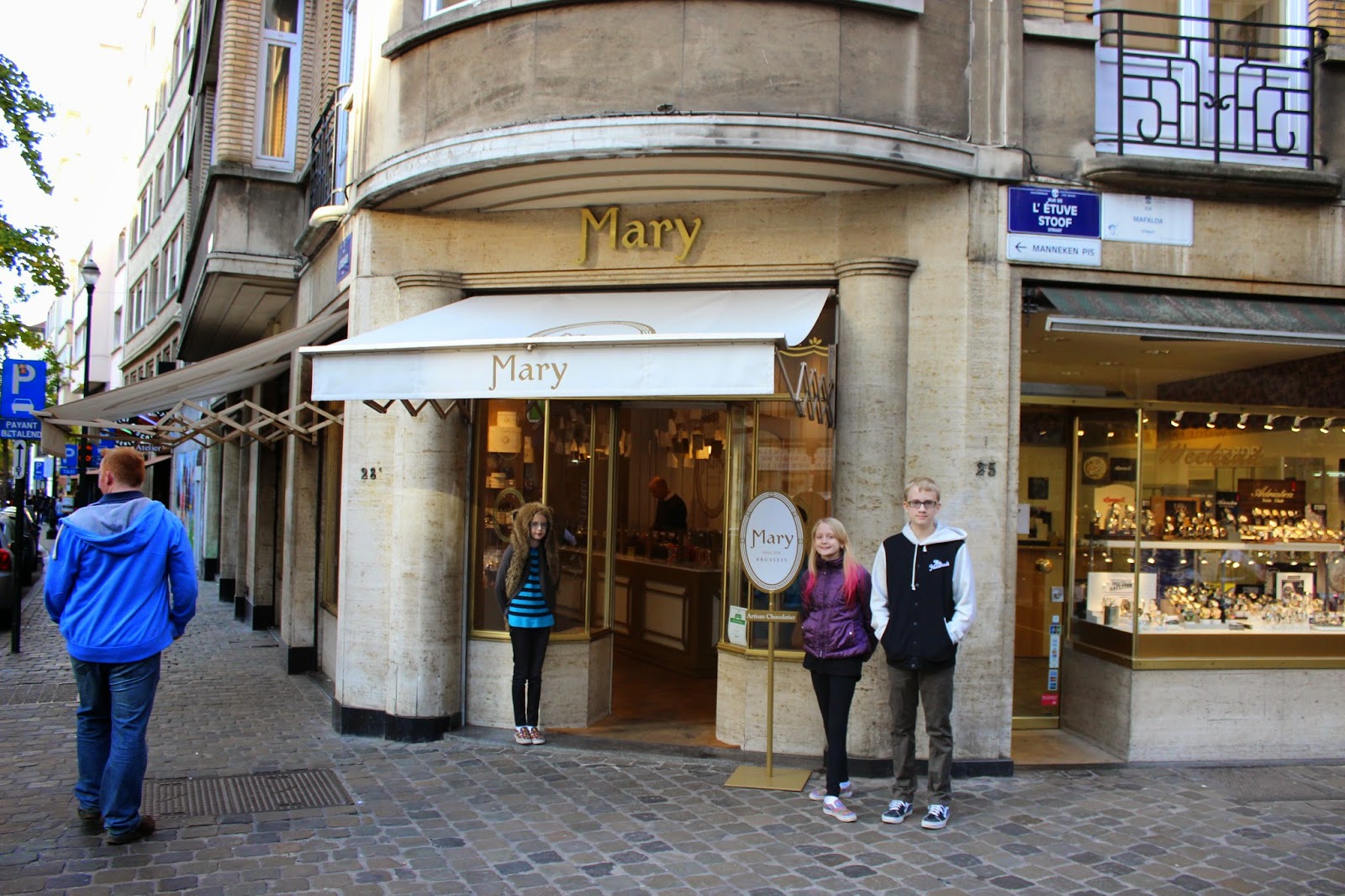 I think that guy talking to my husband is a chocolate scientist or something, because he went into this long spiel about how amazing their chocolates are and how they are made using special blahblahblahbeer. The chocolatiers almost wrestled me to the ground when I snapped this photo. "One must not take pictures of the chocolates!" Don't look at these chocolates, you guys, because they are top secret and I don't want to wake up one morning with a chocolate mold of a horse's head in my bed. 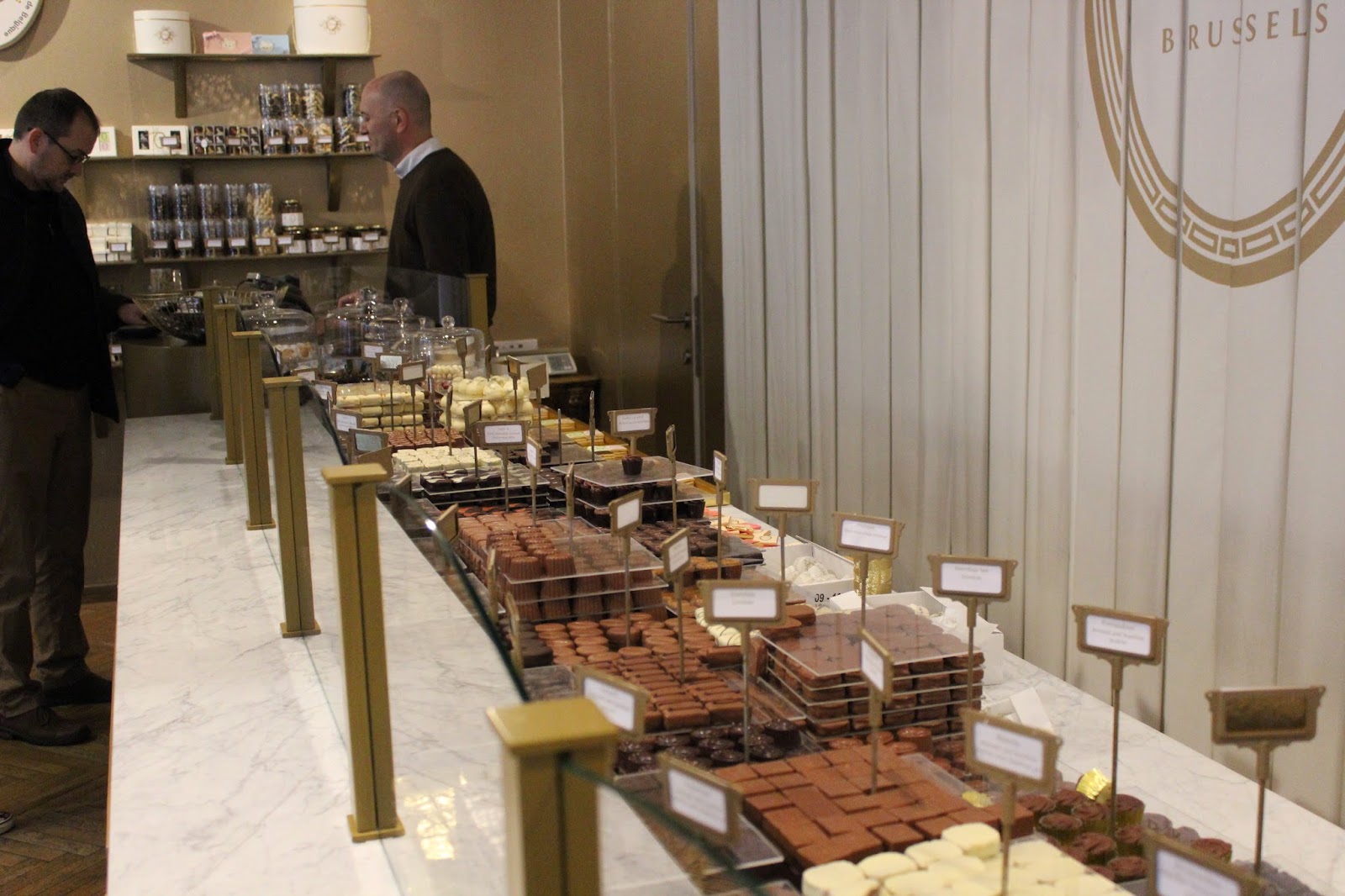 I'm not gonna lie, they were fantastic. Also, the chocolatiers wore white gloves.

Since we were in full blown tourist mode, we decided to walk another few blocks to see Manneken Pis, which is one of Brussels' more famous landmarks. It's a statue of a little boy peeing. It's about 400 years old, and it was surprisingly tiny, considering how famous it is. Kind of like the Mona Lisa, but with pee. 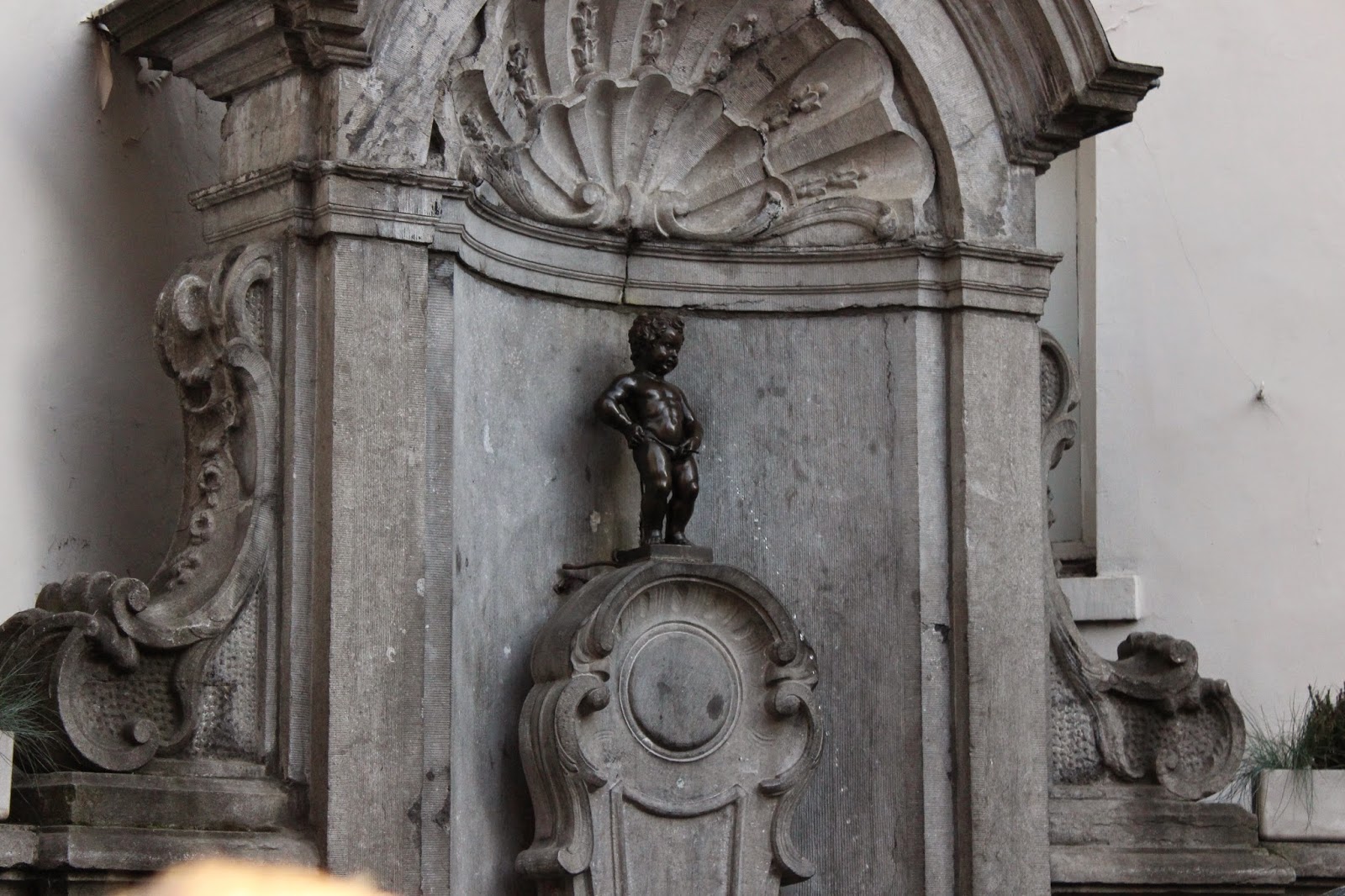 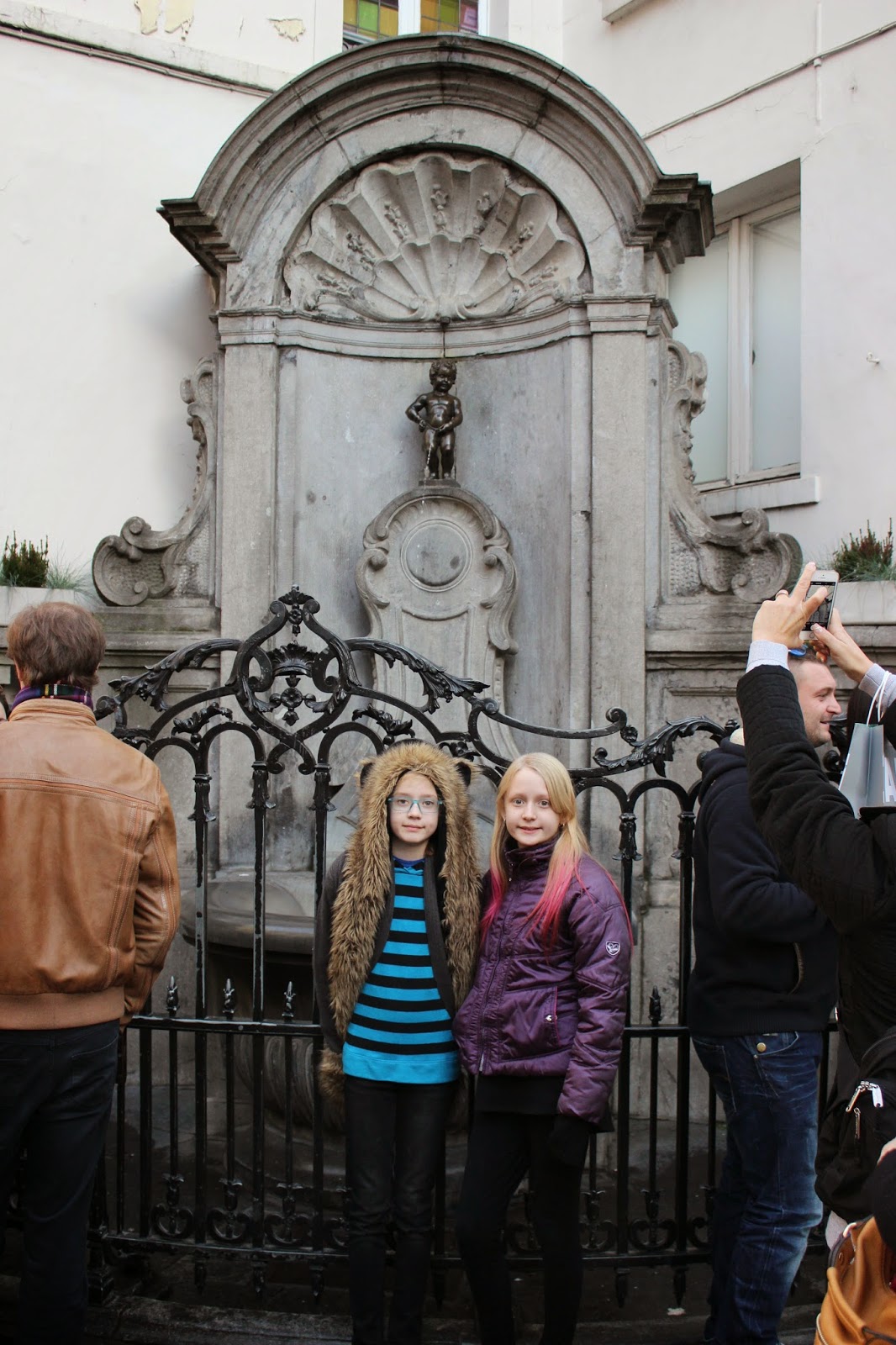 I mean, it's cute and all, and all the shops sell little replicas, but I'm probably good not seeing it again for the duration of this tour. We all agreed that the best part of our very long day was the museum.

Well, that is until we saw this: 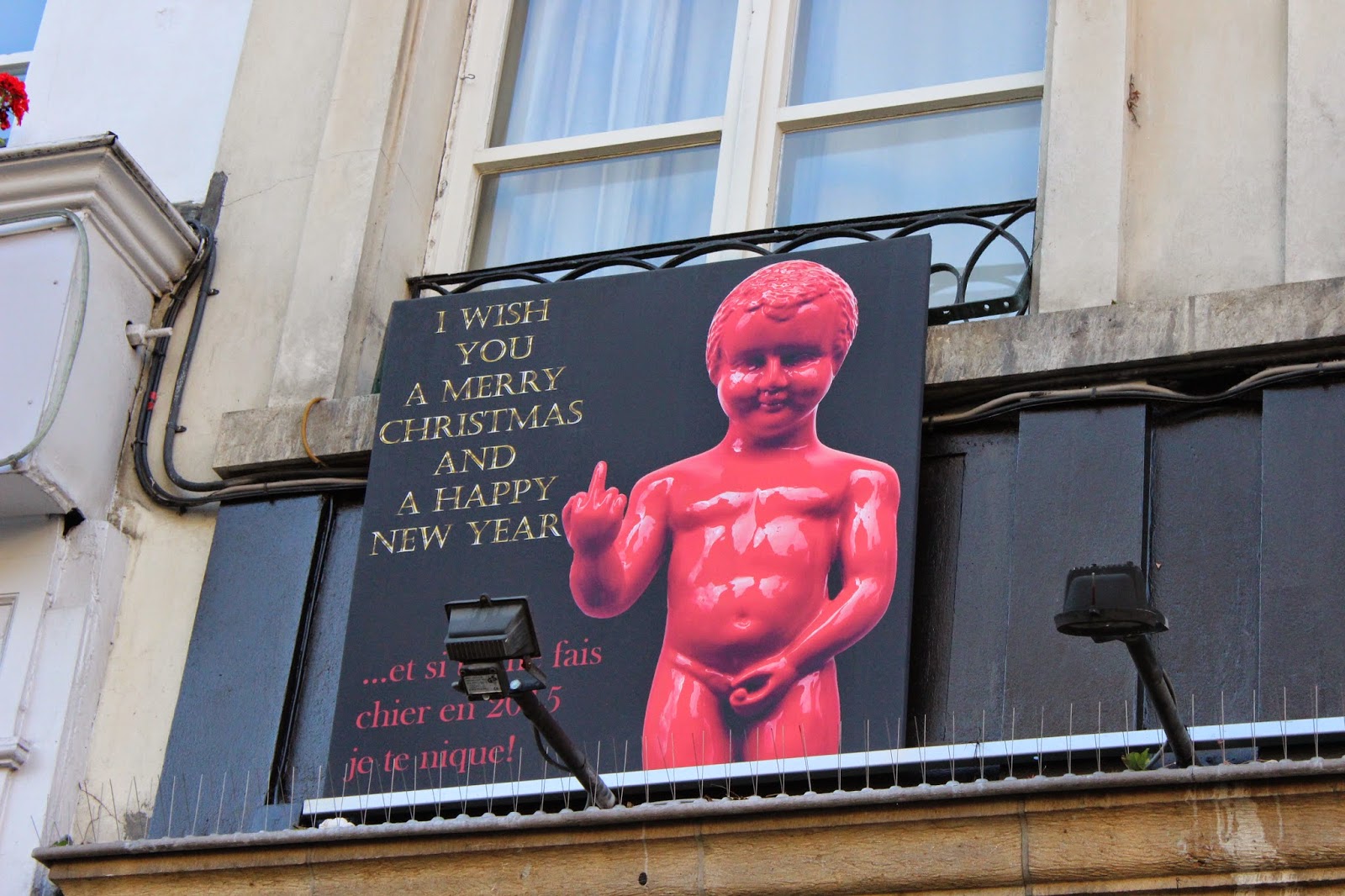 I haven't been updating because I like the idea of you, dear readers reader, imagining me happily munching away on Belgian chocolate and waffles with my lightning fast internet, wearing my cute leather boots and strolling around my adorable European neighborhood. Hell, I like to imagine myself in that scenario. But the truth is, even in a cherry post like Belgium, any PCS (Permanent Change of Station, or, Poop Crap Shit if you prefer, as I do) is just freaking hard. And I haven't wanted to be all whiny, because we are getting paid to live in Europe. Don't get me wrong, we love it here, but we just passed that gushy honeymoon phase and went right to the, "Belgium, why you gotta leave the toilet seat up and throw your dirty socks on the floor?" phase. The good news is that Jack's missing college UAB, which was packed out in July, finally showed up. Here in Brussels. With destination: Los Angeles clearly marked on the front.

Anyway, since I've started getting "are you alive?" emails, I figured I'd go ahead and just whine a little, because the contractor next door just saw my boobs. Here's how it happened. I was safely several floors up in my dressing room, looking for a bra, when I turned to see a guy on a one of those truck ladder thingies right outside my window. Now, normally I would run through the house, closing all the heavy draperies, screaming, and hiding out for a week, but right at that moment the school called to say one of the kids was vomiting. And since we don't have a car yet because we don't have our Belgian ID cards (what is this, Brazil?) and we can't get a car without a Belgian ID card and blahblahblah I had to call a taxi. All the workers happened to be out having a smoke when I went outside to wait for cab, natch. Ignoring the smoking looky-loos, I go to the school, grab my daughter after spending ten euros on cab fare just getting through all the security checkpoints at their international prison school, and hightail it back home, Another 30 euros later. Unfortunately, some other contractor working on the same house as the peeping Tom guy was blocking our driveway and the cab driver had to park about a block away because of the traffic. Let me just say that these guys block our driveway every single day and normally we don't care, but on this particular day, with my retching daughter, walking a block while holding a ziploc bag to catch her barf just sent me over the edge. I got her settled in the house and I marched right over there. Oh, yes I did. Boobs and all.

So that was my morning, and that's enough complaining for one day, except one more thing. Okay, the European refrigerator? I mean, it would be perfect if I was in college and only had room for a pack of Chips Ahoy that my mom had Amazon deliver and a bunch of beer my roommate got with his fake ID (not naming names, here), but I've got a family to feed, yo. But it's workable. Worst case scenario, I go down to the basement where I'm certain bodies are buried from one of those Big Wars and did I mention Waterloo was right down the road from my house? And every time I go by I have to sing the ABBA Waterloo song? Where was I? Oh, yeah, so there's a refrigerator down in the scary basement that I can utilize to keep my sauvignon blanc properly chilled. No, it's the tiny European oven I'm having a hard time with. None of my beautiful pans fit in it. At least I won't have to worry about fitting a turkey in it next week because Mitch has to work. I think it's because he's so important? That, like, NATO will shut down or something if he spends Thanksgiving with his family after a year of missed holidays? Causing another Big War? Or something like that? So, back to my oven. How tiny is my oven? There's barely room for my head in it, you guys.

Everything else is pretty good. I still haven't started working because someone has to sign a piece of paper somewhere saying I'm still relatively secure, and I think that takes a really long time because who has a pen these days?
Posted by Kate at 6:53 AM 1 comment:

I Finally Found a Use for all these Fake Fireplaces 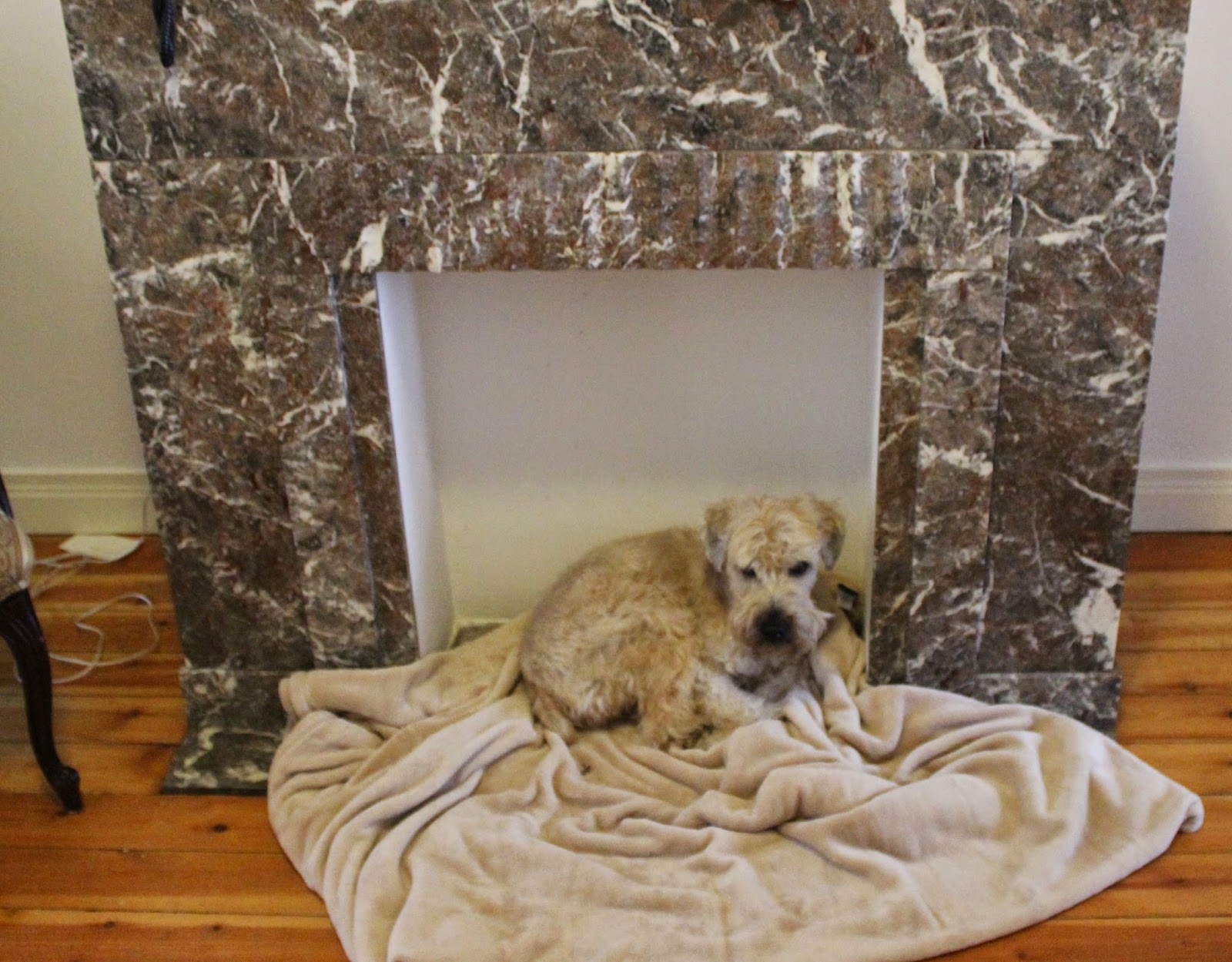 In other news, fourteen happened. 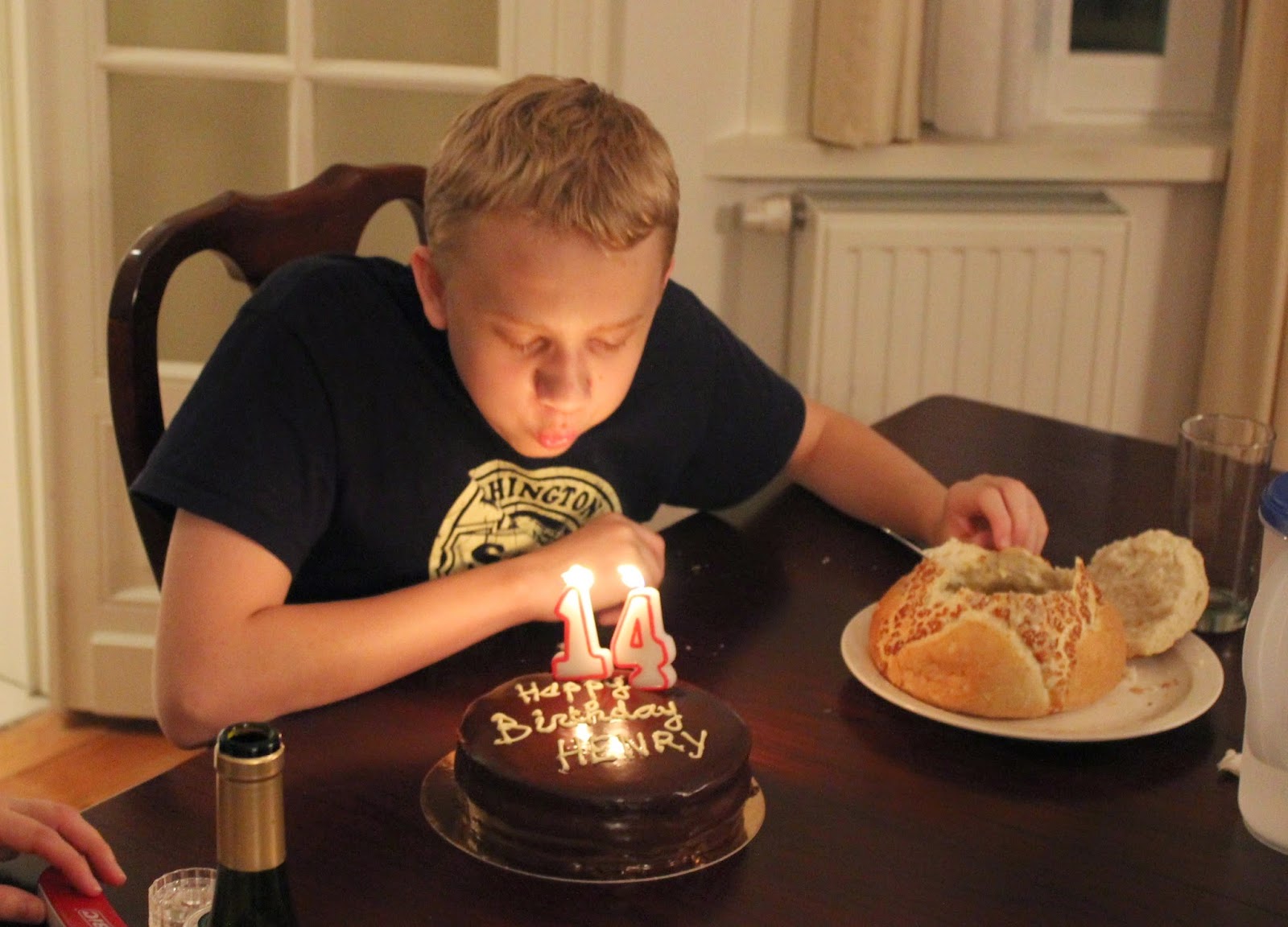