I keep waiting for something embarrassing or amusing to happen around here, so I'll have something to write about, but have you seen the news lately?  However, write I will, today, because it's my mom's birthday, and I mostly wrote for her. Happy Birthday, Mom. I miss you every day.

My nine year-old daughter walked into my room earlier this week, where I was sitting on the bed, staring in shock at the news on CNN of the attacks on the American Embassies in Cairo and Libya. She curled up next to me and it took me a minute to notice tears streaming down her face. I took her downstairs to the giant map we have on the wall, and pointed out where the Middle East was in comparison to Brazil, and how faaaaaar away it was from us.  I also reminded her how amazing and smart her Daddy is, and how the reason we are even here in Brazil is so he can make our embassy even safer.

"Because it doesn't even matter if it's Brazil or that other embassy where the people died. Somebody's Daddy probably made that embassy safe, and the bad guys still got in." Oy. I spent another fifteen minutes or so trying to soothe her fears, and she finally calmed down and went to school, where easy distractions are at the ready. Meanwhile, we turned off the news and stopped talking about the horrible events of the week in front of the kids. We feel very safe here, but the degree of separation is small in the Foreign Service. Google tells me about the four Americans who lost their lives, but not of who their families were and how they must be suffering right now. After losing my mom this summer, I feel their pain acutely, but I can't fathom being able to accept such senseless acts perpetrated on my loved ones.

A few years ago, my biggest external threat seemed to be the raccoons getting into our chicken coop or a random coyote wandering onto our property. I never locked my front door, I left my purse in the car so I would never forget it, and my wonderful extended family was in relatively easy driving distance. I could make a doctor's appointment and completely understand what they said to me, and I could park my car there, too. When Henry grew up, he wanted to be a food critic. Jack wanted to be independently wealthy so he could have a mini fridge built into a recliner that was attached to his xBox, Olivia wanted to be an Animal Petter (Totally a job! They had one where we boarded Seamus last year), and Grace wanted to be Lady Gaga.

Shortly after we arrived in Brazil (the kids fresh from their "Security Overseas" Seminar at FSI), Olivia skipped out ot the bus and noticed a fat envelope sticking out of our mailbox.  In her singsong-y voice, as I buzzed her through our tall, zombie-repelling security gate, she said, "We got a lettah bomb!" Of course, it wasn't a letter bomb, it was an add for bikini-and-ass waxing or some such.  But that is our life now. We are cautious out in public.  Leaving my door unlocked now is not even an option. And lately, Mitch and I have been going over our plans to stay safe, collect the kids, and stay in touch if the unthinkable happens.

So, do I regret doing this? Nope. Not at all (just don't ask me that in the first week of our next tour).  My kids have friends from all over the world, and their lives are forever changed.  Henry still wants to be a food critic, but an international one. Jack wants to go into global affairs, and Olivia wants to be a veterinarian "but with monkeys and stuff".  Grace still  wants to be Lady Gaga.  And even though I grew to love Brazil kicking and screaming all the way, I eventually got there.

If anything, the attacks on the American Embassies this week make me feel even stronger that we are doing the right thing.  I love that my husband is committed to keeping Americans safe overseas, and I love being surrounded by the kinds of people who are also committed to keeping Americans safe, even if it means putting themselves in harm's way to do so. And as much as I loved not locking my door and only worrying about the raccoons, I know now that the sense of security I felt back then was thanks to the many that work to keep America safe, including Ambassador Chris Stevens, Sean Smith, Glen Doherty, and Tyrone Woods.

Mostly, this lifestyle has taught me that I fracking love America. I just didn't really know it until we left. 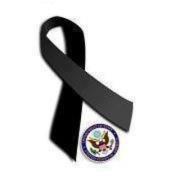