Bom Dia! We've been here a week. I'm sending this quick update from the embassy because we don't have internet or cable (which also means no international phone) thanks to a messed up visa and paperwork blahblahblah (too boring to elaborate).  We left Atlanta at 9pm last Friday and arrived at 6am the next morning. The plane was FULL of teenagers on their way home from Disney.  Jack did not mind this.  I was seated nearest to the bathrooms, and one of the teenagers spent six hours vomiting with the door open. It was literally rolling out of the bathroom and down the aisle to me. A vomit magnet is what I am. It smelled great!

We were met by our sponsor and another embassy employee who was there to assist with getting the dog through customs. Our sponsor took us to our new home while Mitch stayed behind to get Seamus, which ended up taking five hours.  We love the location of our house, and the yard is big and beautiful, with a gorgeous view of the lake. Pics to come.

The kids are adjusting very well, considering they have no internet, tv, video games, or toys. However, we are all nearing the last of the books I downloaded onto the Kindles, so we'll see how things go after that. They are spending a lot of time playing outside and generally laying about, and walking around the neighborhood spotting all kinds of unusual creatures. After a few days of lethargy, Seamus has bounced back and is back to his job of guarding the kids outside and has been trying to catch a few of the many geckos we have around. The little monkeys tease him from the trees and scream at him, so they aren't his favorite, although the girls love them.

Our car won't be here for a while, and our stuff we'll be lucky to see by Christmas, but we've been able to borrow a car from the motor pool at the embassy and get groceries and eat out a bit. Grace and Henry have been chatted up in Portuguese by older ladies, all the while being stroked on the arms or neck. I thought Henry would faint when it happened to him, but Grace seemed to take it in stride. Jack's knowlege of Spanish has been helpful, in fact, he invited the gardeners in for lunch yesterday, because he felt bad that they were eating alone outside. They, uh, declined.

As for me, I'm doing my part feeding the starving mosquitos of Brazil with my delicious blood and trying to keep calm and relaxed, which is one thing that is very easy to do here. Everyone is relaxed. About everything. Maybe it will be good for me. Everything here is prohibitively expensive, especially shoes (sad face). And on that note, I'm off to Amazon.  Will have pics of the house when I get online at home, which could be next week. Or next month.  See! I'm already becoming Brazilian.
Posted by Kate at 2:00 PM 7 comments:

Email ThisBlogThis!Share to TwitterShare to FacebookShare to Pinterest
Labels: Brasilia

I have a million pics from our trip back home, but camera batteries are dead, the USB cord is missing, and we are exhausted, so I'll put them up later.  We spent every moment we could with our loved ones and had a blast. I'll particularly miss how my mom folds my underwear. Jack turned fifteen the other day and in the past few weeks has learned to drive a car, ride a dirtbike, and shoot skeet with a shotgun with his manly cousins. The kids have swum, kayaked, gone tubing, boating, hiking, seen their last American movie without subtitles for a long time (Harry Potter, of course), and been on four airplanes. They are great little travellers with nary a complaint, even as we sat on the tarmac at National Airport last night from 10:00 to 11:00pm, waiting for a gate to open up.  We are desperately missing our pooch, and it's hard not to go visit him at his fancy dog hotel, but I only think it would be harder on him, so we'll see him in Brazil in a few days.

Our plan was to spend one last day in the museums of DC today, but by unanimous decision we instead are spending it ordering room service, swimming, wearing our pjs, and watching $18 movies. Jack is spending the afternoon with his posse from school in Vienna. So, I bid thee farewell until we  have our internet hooked up in Brasilia, when I'm sure I'll have tales of our misadventures with the Portuguese language, as I've decided to do a crash course as we land in South America, increasing my knowledge of four words to six.  Maybe seven.

We interrupt this break for a short break.

Hi there. I've been loving my time unplugged and hanging with my loved ones, but in an effort to remain silent while my children are in their 12th hour of much-needed sleep, I thought I'd drop off a few pics. We hare having a wonderful time, trying to savor every moment while avoiding thinking about how long it will be before we see everyone again. I've lost two cameras, so these are the only photos I have right now. We've been to Priest Lake, Spokane, Seattle, and Whidbey Island and are headed back to Seattle and Spokane tomorrow, followed by DC and then Brazil next week. Até logo! 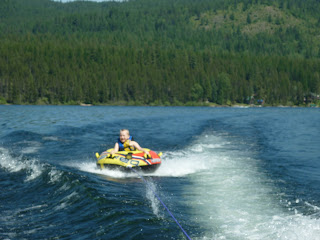