When we last left our heroine, she was recovering from surgery in the ever-fabulous-but-chilly Estados Unidos while her husband kept the home fires burning in Brazil by throwing the children into death-defying situations and having them *gasp* make their own lunches.

Currently, however, I am writing this from my hammock at home in Brazil.  I would snap a picture of my feet with the lush greenery and sunshine in the background, but then I would have to get up to get the camera, and, well, I've got no uterus with which to get up with.  Also, I need a pedicure. Anyway, YAY! I am home with my babies. They had no idea I was coming home, they just walked in the door from school and there I was. I even got two hugs from my teenager. My medical clearance was reinstated last Tuesday, so I packed my bags with Halloween candy, bloody body parts (which were a definite hit with the security officers at the airport--also, I should clarify that these were not real body parts, despite what my friend Leanne thinks), painkillers, and gifts for the kids.  The flight itself was grisly, involving me running through the Minneapolis airport carrying my broken rolling carry-on (sorry, doc!), getting forced to check said carry-on, forgetting that all my painkillers were in said carry-on and would remain so until I got home the next day. All's well that ends well, however, and I couldn't be more thrilled to be home. And none too soon, I might add. I was getting calls that were growing increasingly frantic in nature.

"We're doing great, but when are you coming home?"

"Everything is falling apart! The bus came this morning and Jack was making a sandwich in his underwear".

"No one has any uniforms. The kids think Graca is selling their shorts. When are you coming home?" Graca is our cleaner. She deserves a huge tip after the last three weeks.

"My throat hurts from yelling at the kids.  How do you keep them from leaving their crap everywhere?"

"Grace lost her Kindle.  She had it when we were camping.  Any idea where it might be?" Um, they were camping after I left, so, no.  I had no idea.

"Uh, honey, you cleaned out the checking account."  Okay, so that technically wasn't my fault. While I was massively drugged out on painkillers, I had a foggy idea that I might die,  so from my hospital bed I ordered a bunch of food, clothes, and shoes for the kids in their next sizes up, then promptly forgot about it.  But, it's sweet, right, how I was caretaking my family from 10,000 miles away and living in an alternate chemical reality?

I was able to go to the kids' school conferences on Friday, where I learned that Olivia cried every day that I was gone, but is excellent at math. I was just happy to hear that she's more or less wearing shoes this year. I also "learned" that Grace talks a lot and loves performing.  Henry, in typical fashion, is excelling at flying mischieviously under the radar, and Jack is, well, okay, I'm not sure about Jack. I got tired out after seeing his first teacher, but his grades are awesome, so if his teachers think I'm a lousy mother for not going to all his conferences, then so be it. A uterus-less woman can only do so much, you know (and yes, I've been using this excuse a lot, why do you ask?).

After conferences was the Embassy Trick or Treat. I was able to get the girls' hair and make-up done, but was so wiped by that time that I spent the rest of the day sitting on a chair outside Mitch's office handing out my American candy.  The kids had a blast trick or treating at all the offices with their friends, though.

I am being eaten alive by mosquitos right now, but the electric mosquito racket is inside with the camera, and you know how the rest of this story goes....
Posted by Kate at 11:47 AM 4 comments:

"We're probably going to go camping when you're gone," Mitch said last week.  "Well, make sure you pack bug spray and sunblock and headache medicine and extra water and jackets and don't take any unnecessary risks," I nervously replied.

And these are the pictures he sent me of their "camping" trip: 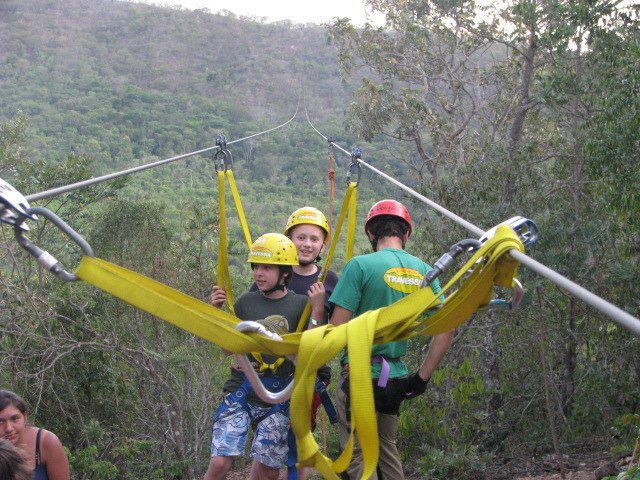 ﻿
﻿
I'm really glad Mitch didn't tell me what he had planned in advance, or I would have worried all weekend. As you can see, the kids had an amazing time. Meanwhile, Jack is in Sao Paulo at some service conference or somesuch.

Can't wait to get back there and do some risk management.
Posted by Kate at 7:23 PM 5 comments:

Soon after we got back to Brazil from R&R, I began having medical problems. I won't go into detail, because, you know, it's gross and whatnot, but I did see some doctors in Brasilia.  They had all kinds of opinions, ranging from "nothing is wrong with you" to "this is what's wrong with you, even though NONE of the symptoms match the diagnosis" (side note: hospital emergency room floors in Brasilia are cleaned by dumping a dirty bucket of water on the floor and squeegeeing the waste out the front entrance of the hospital).  Before long, I was in enough pain that I really didn't leave my bed for several weeks and it was decided by my team (which consists of Mitch, the embassy health unit, the state department, and myself) that I would fly home to the US for some of their fancy 'merican doctorin'.

The problem with a medevac is that you lose your medical clearance and may not return to post until it's reinstated, so I had to plan to be gone a long time from my family.  This is another one of those instances where this lifestyle really just sucks. However, I knew I couldn't spend the rest of my life in bed, because there aren't enough reruns of 90210 in portuguese for that. So, I got to work in the kitchen, making three weeks worth of freezer meals for my people to eat in my absence.  I chose to fly home to Spokane, rather than the medevac point of Miami, and am so glad I did.  My amazing family has been taking good care of me. Also, it's pumpkin latte season here in America, so double win. I just hope I'm not still around for eggnog latte season.

At my first appointment, the doc knew right away what the problem was (and no, it wasn't what the Brazilian doctors thought), and by some amazing stroke of luck, he had a surgical cancellation for the next day.  I will confess that I laid my sob story on pretty thick so I could get home quickly--four hungry children, overworked husband, terrorists at the door, etc.  But hey, whatever works, no?  So, I had a complete hysterectomy this week at the tender young age of 29 (my story, my fabrications, so shut it).   Everything went well, and the doc's diagnosis was spot on.  Now it's just a waiting game while I recover and can go back to Brazil and my babies.  To reward myself for partnering with my crappy uterus for so long, I got a fab new purse.  Kind of like a fine leather replacement uterus which accessorizes better than the old one.

My narcotic-influenced sense of humor is typically horrible.  Every time a new doctor or nurse explains things to me since the hysterectomy, I adopt a solemn expression, lower my voice, and say, "but I'll still be able to have children, right?"  The look on their faces makes me laugh and laugh. Which hurts. 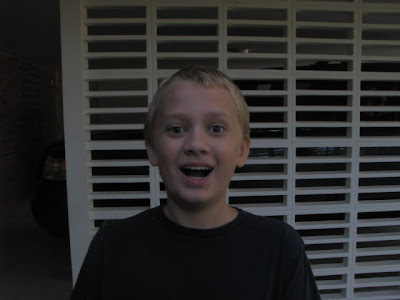 After four years, three orthodontists, at least one college fund, two states, and two countries, Henry finally got his braces off.
Posted by Kate at 3:34 PM 1 comment: