It's been an eventful week here in Brasilia, and I'm not talking about the entire case of Italian Wedding soup I ordered that exploded in the Diplomatic Post Office. Mitch and I had events on both Friday and Saturday night, and we hired our favorite babysitter, Jack. The younger kids LOVE it when he babysits, because he's not allowed to act like their brother or he doesn't get paid his allowance for the week. Anyway, Jack was arguing with me about letting the girls watch a PG-13 movie that was billed as a cross between 'The Blair Witch Project' and 'Cloverfield'. I finally said, "Not one more word. I refuse to discuss it."  This is the point Jack called me a "Hater of Reason".  I loved that so much I sat down to change my Facebook name to Kate Hater of Reason, and he was all, "You'll spend 20 minutes figuring out how to change your Facebook name but you won't spend five minutes hearing me out about the movie!?"  Yep. A Hater of Reason doesn't need to be reasonable, after all.

Friday night was a charity "Ruby Ball" and we didn't get to bed until 2:30. Here we are all grumpied gussied up: 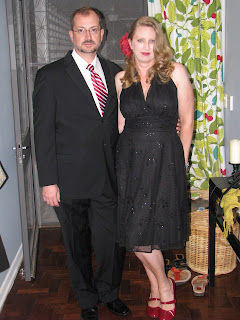 That's Mitch's pre-drink "I don't wanna talk to people and go out in public" face, but we did have a great time. I was feeling said great time all day yesterday, so I asked the kids to be quiet while I took a nap (poor Mitch had to work all day). Anyway, I woke up two hours later to a silent house. The kids had washed the dishes, folded the laundry, and done all their homework, and I hadn't even asked them to. I KNOW!!!! I was heaping praise on them when Henry gave me his most angelic face and said, "Can you buy us this video game so Jack and I can play it together?"  Ahhhh ha. I saw how it was. And hell yes, I bought the little operators a video game. That was an awesome nap.

I was looking at my pose in that photo, and remembered a photo I came across the other day of a trip to the Nutcracker from several years ago. Notice Grace's pose. Like mother like daughter. Red patent shoes should be noticed, dammit. 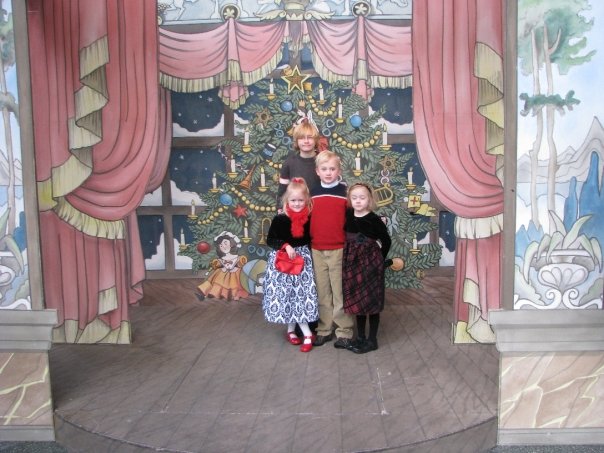 Today I let Jack have my  hour when Vagana (the 'g' is a hard 'g', fortunately) arrived to do our massages and the girls and I headed out to a fair to do a little shopping for gifts to take back home next month. We came home with no gifts, but we were all sporting some lovely new jewelry for ourselves.

We came home to find this set up in the backyard: 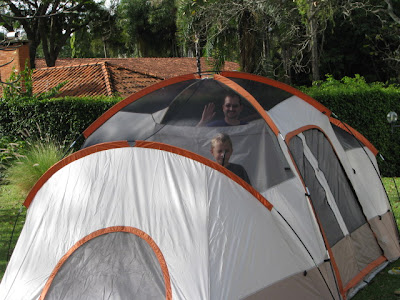 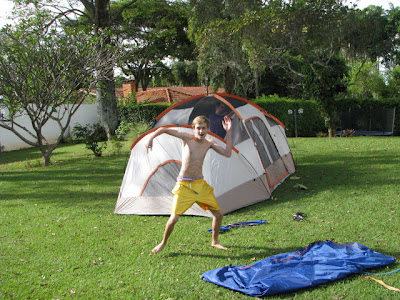 That's right. We're getting ready for a big camping trip next weekend. Considering that my idea of camping is staying in a hotel that doesn't have room service, my camping list probably won't surprise you: 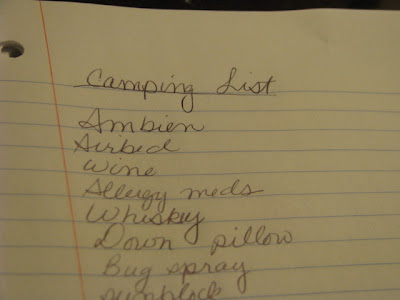 This little doll won't be going with us, but now that his eyebrows are growing back in, I thought I'd show you how he's getting cute again: 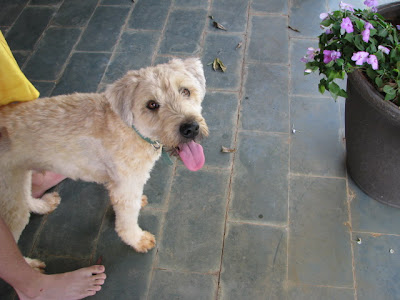 I'm pretty freaked out about camping in a Brazilian jungle, but I'm told there are showers and whatnot, and it's supposedly a real campground, so we'll see. What you may not know about me is that I'm a disaster magnet. The other night I was at a friend's house and we ran out of firewood for the little firepit, so some ladies were pulling dead branches out of the palm trees to burn. They got all they could reach and asked me to get some since I'm the tallest. "No," I warned them, "Nothing good will come of that. It'll end in tears."  Well, they cajoled me and I pulled out a branch. A giant bug fell on me, but I shook it out of my hair and was fine. They cajoled again. "Pull really hard and get a big one!" they encouraged. So I did. I got a huge dead palm leaf and dragged it over to the fire. I leaned over to pick up a big chunk of it (it was very dark out), and I noticed that the chunk was swarming. I had pulled down a huge wasps' nest. There was screaming and running and a brave lady who speared the nest and dropped it into the fire, saving all our lives. The next day, the girls came home from school (I hadn't told them about the bees) and were all, "MOM! Is it true that you pulled a bees' nest out of a tree with your bare hands? Everyone was talking about it at school!"  The moral of this story, children, is don't rely on me to save you if the ship's going down, because it's probably sinking from something I did. But generally with the best of intentions.

So, stay tuned for tales of our camping adventures.  Meanwhile, I grilled a pizza tonight. It didn't suck. Well, the first two did, but the third time was a charm: 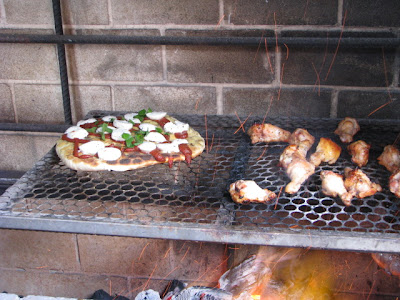 Must Be a Good Book 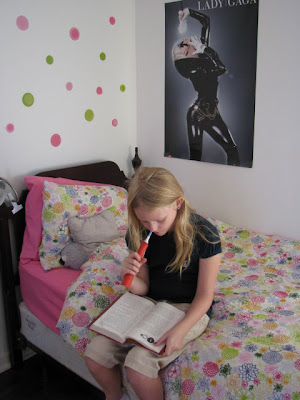 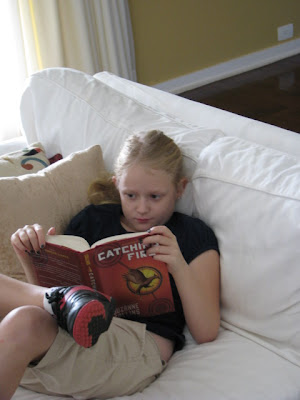 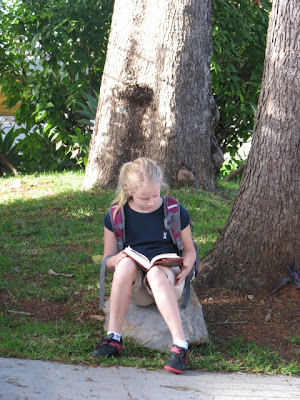 Having someone come to your house and give you each an hour-long massage every weekend to the tune of about $25.

Yesterday was a holiday in Brazil, so there was no school or work.  The CLO at our embassy organized a trip to the NEX Jaguar Reserve, which is out in the middle of nowhere, a few hours from Brasilia. The road to get there was little more than a goat trail with bandaids covering the streams. Some would call the bandaids "bridges", but I wouldn't. The embassy chartered three huge tour buses to get us there, but did we reserve 6 spots on the luxury buses? Hell, no. Because we are hardcore, and not afraid of getting scratches on our car. Anyway, there was a mix-up and the buses were overbooked, so we took three extra kids with us. The poor teenagers had to sit in the way back, and every time we hit a hole or bump, their heads would hit the roof of the car. How I laughed, because they were trying to sleep, and also, I'm mean.

The Jaguar Reserve houses jaguars that have no means of living in the wild. They've been raised as pets, abused, declawed, are blind, etc. They're stories are very sad,  but they are lucky to be where they're at, safe and seemingly well-cared for. 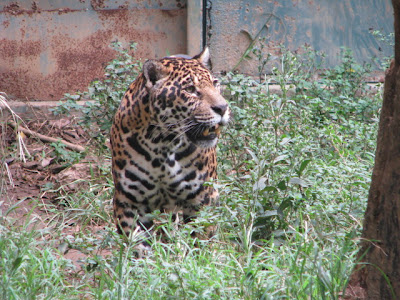 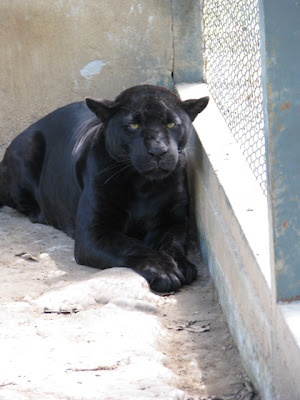 This black jaguar was really aggressive. You could tell she was pissed by the way her ears were flattened back. Just as we were about to leave the area, she took one giant leap and jumped at the fence, and added a nice, healthy cat-scream for good measure. All the kids in front of her needed a change of underwear after that. How I laughed, because I am mean. 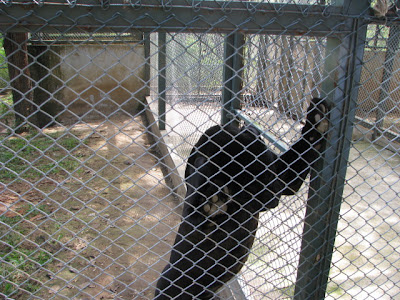 The pumas were very, very interested in the toddlers of our group. It was almost feeding time. 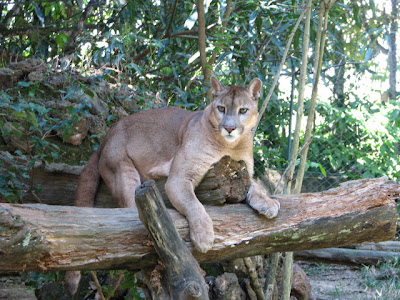 After we admired all the cats, the guide took us on a hike, and we ended up here: 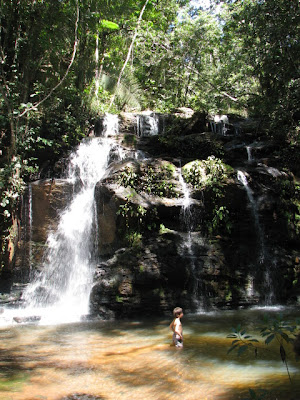 Did I have towels or swimsuits for my kids? Hell, no. Did that stop Olivia from diving right in? Hell, no. 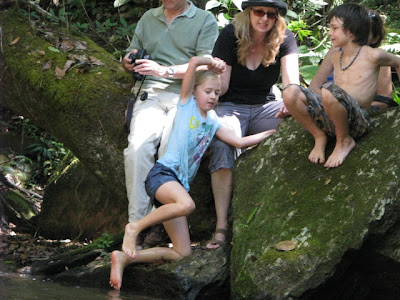 I had to pull her out because it was c-c-c-c-c-c-cold. But she went right back in after giving me a cold, muddy hug. I don't know where she gets her meanness from.

Grace was all, "Brrrrrrrrrr. It's too cold. I don't think I want to get in any furthur." 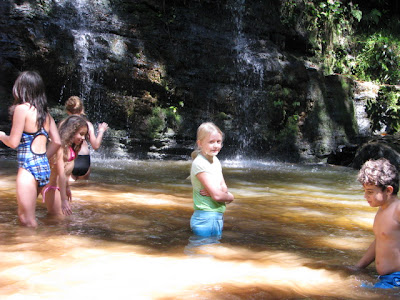 And then, she was all, 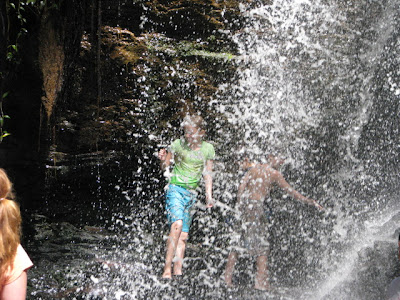 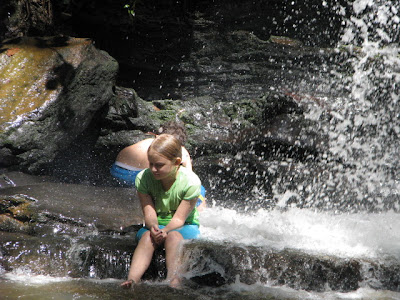 Jack and his teenaged friends only got their feet wet, but Henry and his friend were all in: 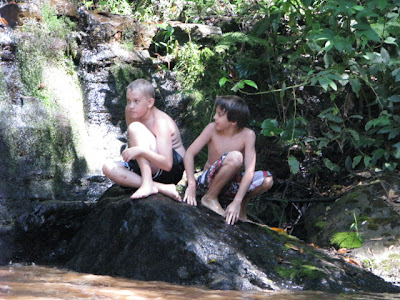 The hike back was steep, but the scenery was gorgeous. We passed a very large chicken yard with hundreds of chickens squawking about.  We were tired and hungry, but the jaguar place provided a big lunch for us, AND caipirinhas when we got back. After our lunch, it was time for the cats' lunch: 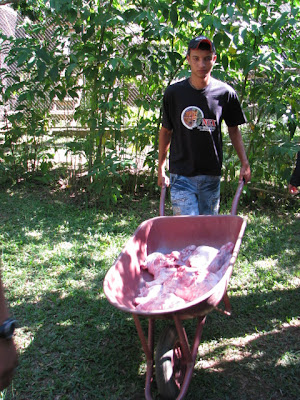 Yum. A wheelbarrow full of dripping meat. The cats had the same thing we had for lunch. Chicken! I kept remembering the chicken farm we passed earlier in the day for some reason.  They wrangled the cats into their cages, then rubbed the meat all over the trees in rocks in their enclosures, finally hiding the meat up high, so the cats would have to hunt for it. It was amazing to watch. 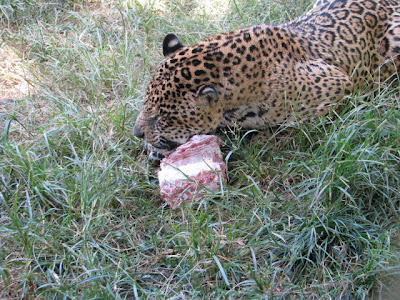 After another hour of watching them feed all the cats, we had coffee and fruit, and the adults got to go play with a jaguar. I'm not kidding. Kids weren't allowed anywhere near it, because they are viewed as food. I stayed with all the kids, and Mitch and Jack went and played with this little kitty: 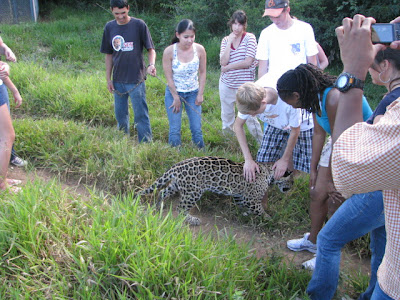 See my firstborn, petting a Jaguar teenager? I'm pretty sure something like this wouldn't be allowed in the States. Brazil, you win at not worrying about lawsuits!

It was getting late, so we said goodbye to the cats, the parrots, and the toucan. 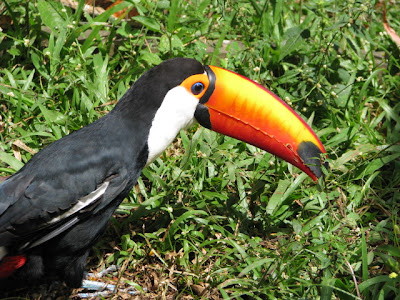 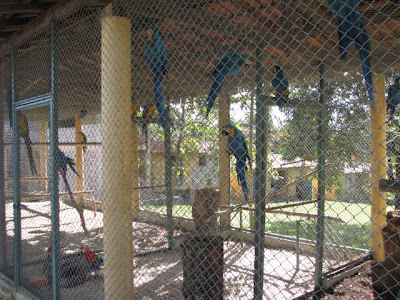 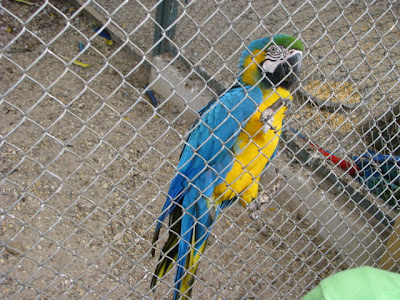 And followed this roadrunner home. Actually, I'm not a 100 percent sure it was a roadrunner, because it wasn't in cartoon, but it WAS running on the road:

All in all, it was a great day, and no one even complained about riding home in damp, muddy clothes.
Posted by Kate at 11:56 AM 3 comments: