Brupdate (see what I did there?)

The kids are on holiday all week. I know. They've been on holiday since the end of September, so what's another week? They did all their placement testing during the two days of school they went to last week, and I'm happy to report that they did not flunk down a grade! Plus, all the math tutoring even brought the girls past the point where the new school is in math. And when I say tutoring, I mean I made them do online math apps while I played Candy Crush. Unless they needed help, in which case I sent them to their brother. They are a bit down today since it's Halloween and they're used to a lot of fanfare. Brussels apparently has Halloween and trick-or-treating, but we aren't sure if they do it in our neighborhood. I came up with the marvelous idea of  'trick-or-treating' to a few of the chocolate shops in our neighborhood and picking out any chocolate they would like, followed by pizza from the artisanal pizzeria two doors down (next to the wine shop, so.....two birds, yo) and scary movies. On Netflix. Because we now have internet and phones that the embassy set up for us. Which is all kinds of amazing, considering trying to deal with that stuff in Brazil caused me to lose my class one medical clearance.

The only hiccup so far is getting data on our cell phones. For some reason there is no internet, although we can call and text. This is a problem for me, because I like to Google things like, "how likely are you to get infected by disease on the metro?" while I'm actually ON the metro. I'm just saying there's a lot of bare-handed grabbing of handle bars and whatnot that goes on, and to prove my point, I'm sitting here surrounded by a mountain of snotty tissues while the kids are out at the waffle truck walking the dog.

We are still enjoying our giant townhouse, although the hard water has wreaked havoc with my hair. Google told me to try a vinegar rinse once a week, so today I poured a vinegar/water solution in my hair and rinsed it out. It worked pretty well, I mean, I was finally able to brush through it and as an added bonus, now I smell like pickles.

Oh, and apparently I have a job? I went to an interview (for a job I applied for a month ago) the day after we arrived. I'd had four hours of sleep in 48 hours, and I was pretty hopeful sure I'd bombed the interview. I know the job is in Human Resources at NATO, but I'm not entirely sure if it's full or part time or what my duties are going to be, because FOUR HOURS in 48 hours, you guys. Anyway, my plan of spending two months in bed in my yoga pants reading novels and watching Netflix has been foiled, because they hired me. The kids and I went out to NATO with Mitch this week to get our ID cards and the security was off the hizzyshabizzie. It took about half an hour just to get inside the building. And you can't even bring your phone or iPad in to Google "why is security at NATO so tight?".

I walk all the time and have come to the conclusion that I'm going to have to buy some....sensible shoes. That was hard to even type. My feet hurt so bad the other day that I put my white cross-trainers on to go to the farmer's market down the street with Mitch. It felt like I was walking on pillows! However, people gave my feet looks of utter disgust, like they were covered in dog shit. Mitch said he would never go anywhere with me if I wore them again. Looking for sensible shoes is un-fun.

I'll leave you with this phone pic of my little ladies on the germy metro, taken just before they made waves in the staid halls of NATO: 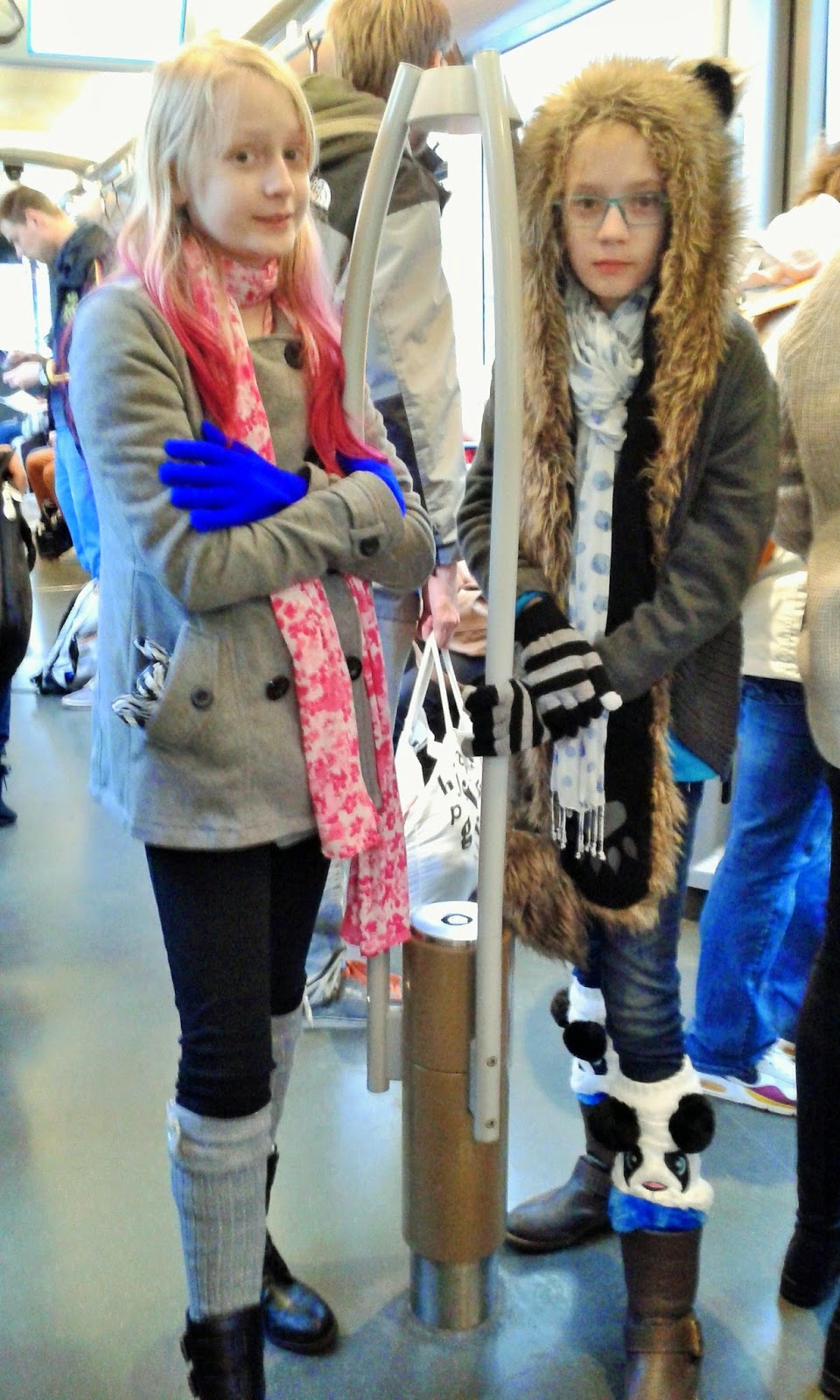 We've been here almost a week, and while there are still deep scars to heal from the year of separation and saying goodbye to family, friends and our Jack, I am pretty sure we are going to love it here. No internet or cable yet, but there is so much to see and do outside our door, who cares? I blew out my hairdryer and flat iron on the first day because of course I did, stupid 220V whatever. I now have a new dumb hairdryer that's dumb, but enough about my hair.

You guys, the second day after I got here I took a tram and a bus by myself. I did get lost a bit, but 40 euros worth of Belgian chocolates from a shop on my getting-lost-route and a 12 pack of French macarons for the kids and I was back on the right track. Belgian Kate is superior to Brazil Kate, is all I can say. My first week French is even better than my third year portuguese was.

The kids love their school. It's beautiful and set in the woods and they've all made friends. Dogs rule here (you can tell by the shit on the sidewalks), and they are welcome in stores and restaurants, so Seamus is kept busy by all the new butts to smell.

We are happy with our townhouse. Guess how many floors we have?