When you lick your sick sister's water bottle so you can get sick and play video games all day, and you do indeed wake up with a fever, but your mom deems you too sick to strain your eyes. Wop woop. 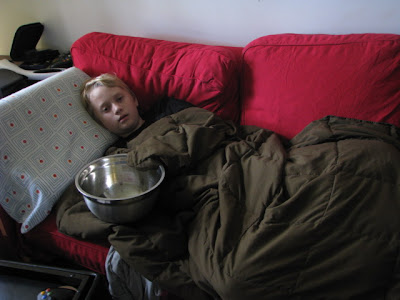 Germs. It's What's for Dinner.

I have some pics from our weekend to post later, but I just thought I'd pop in for a minute to describe a scene I just witnessed.  Grace is home sick from school today, and she was feverishly sleeping on the couch.  Henry walked in, took a long look at his XBox, looked at Grace on the couch, and walked over to her. I was in the hall, unobserved.  He bent down to her and whispered in her ear, "Grace." No response. He stroked her hair and picked up the water bottle on the table next to her. "Grace, honey, is this your water?"  A weak "yes" from her. He kissed her forehead, turned his back to her, and LICKED the mouth of the water bottle.

I swear if he comes down with whatever she has, the XBox will be under lock and key and he'll spend the whole time scrubbing the floor with his toothbrush.
Posted by Kate at 6:09 PM 1 comment:

All's Quiet on the Southern Front

It has been brought to my attention by a few people that I've been sucking at updating this blog lately. Here's the thing.  I don't have anything to complain about right now. Okay, well, I do, but who wants to hear that it rained right after the gardener washed my car or that the maid got a bleach spot on my yoga pants?  That's what I thought. And since my blog posts are generally a document of events gone horribly awry, you can take my absence as a sign that things are going well.
The truth is, we are all pretty happy here in Brazil. I'm finally busy and losing the 20 pounds of being in the dumps that I gained over the last year or so. I can order a meal in a restaurant in portuguese and the kids can help me with the rest. We're making friends. Mitch's job is cruising along well and the kids are enjoying school and all their extracurricular activities. See how boring this post has gotten? No one's been sick or accidentally ordered a bag of smashed a*sholes in broken portuguese. The mosquitos are letting up as the rains are disappearing and my hair is becoming more manageable as well. I'm totally putting myself to sleep now. Don't worry though, if there's one thing I'm sure of in life, it's that the Pulling Stakes family will embarrass ourselves in a spectacular way, and I'll be here to document it for you.

Meanwhile, enjoy this photo of my teenager, who may or may not be staying home from school today even though he isn't sick. We allow one sanity day per semester for each kid, as long as there aren't any tests.  Shhhhh. 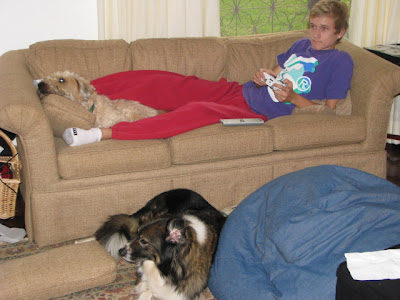 Edited to add: The extra dog belongs to some friends of ours who are visiting the states.
Posted by Kate at 2:16 PM 3 comments:

I don't have a topic today. Which is totally different from my normal scintillating topics of barf, insects, and, well, I can't even think of anything else I write about. We are leaving the rainy season and entering the dry season, and it is hot. Just lifting my fingers to type is a chore right now. Also, with each new season comes a slew of different insects (here I go again-but I promise there's no barf in this post). I was attacked by some creature yesterday and now I'm walking around with what looks like giant and perky red boobs all over my legs. You're welcome!

We haven't gone anywhere or done anything because our A/C in the car broke and we are awaiting a part from the states, and Gah knows I'm way too delicate of a flower to drive around with a pile of kids and no A/C.  Despite the heat and the bugs, everyone is generally pretty happy. Jack made it home safe and sound from Rio and is very bummed that all his American friends are getting their driver's permits and licenses. The driving age in Brazil is 18. Poor little angel.  MWAHAHAHAHAHAAAAAA!

I'm even starting to get busy. I got a job. I will be writing a newsletter for a charitable organization I belong to here, mostly a group of expat women, so thankfully it's all in English. The competition for this job was nonexistent fierce and the pay is nonexistent competitive. I will probably get fired once they realize my only writing skills center around barf and bugs. I'm also making friends bit by bit. That has been challenging for me, because you have to leave your house and be s-s-social and all, which I'm allergic to.

The kids are getting pretty good at portuguese. The other afternoon the girls were playing outside and the gardener, just about finished with his work, wiped his brow and sat on a rock in the shade to try and cool down a bit. Often, I give the guy a Skol (Brazilian beer) at the end of the day. So, without missing a beat, Olivia goes, "Você quer uma cerveja?"  That's portugeuse for "Would you like a beer?" I'm pleased that they're learning hospitality at that over-priced school of theirs. I would prefer she teach me how to ask him "Would you like to wash my car?", however.  I'm the only one I know who doesn't have their gardener wash their car here, but I don't want my kids to get lazy, so I make them wash it. They do a pretty crappy job, too.

Mitch has been playing on the embassy softball team and enjoying that, but I'm not thrilled with all the nursemaid-ing that occurs in the days that follow the games. At his last game, he was speeding towards third and was about to get out. You could hear from the stands a blonde, barf and bug-obsessed lady clearly shouting, "DON'T SLIDE!  DON'T SLIDE!"  Thankfully, he didn't slide and while he was tagged out, it was without much injury, so a definite win. For me. And since I'm the heroine of this story, that's all that counts, right?
Posted by Kate at 7:17 AM 4 comments: